What is Brood X?

By now, you have seen a news story or magazine article talking about Brood X. Beginning anywhere from the end of March to early May, one of the largest broods of 17-year cicadas will emerge from their secretive, underground home. The cicadas are known as Brood X, with the X representing the Roman numeral 10.

What is Brood X? 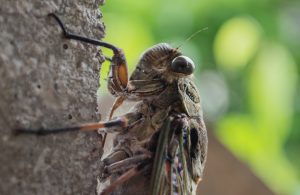 For about four weeks, wooded and suburban areas will ring with cicadas’ whistling and buzzing mating calls. After mating, each female will lay hundreds of eggs in pencil-sized tree branches.

Then the adult cicadas will die. Once the eggs hatch, new cicada nymphs fall from the trees and burrow back underground, starting the cycle again.

There are perhaps 3,000 to 4,000 species of cicadas around the world, but the 13- and 17-year periodical cicadas of the eastern U.S. appear to be unique in combining long juvenile development times with synchronized, mass adult emergences.

Mr. Cooley and Mr. Simon  explain their interest in studying these cicadas:

“We study periodical cicadas to understand questions about biodiversity, biogeography, behavior and ecology – the evolution, natural history and geographic distribution of life. We’ve learned many surprising things about these insects: For example, they can travel through time by changing their life cycles in four-year increments. It’s no accident that the scientific name for periodical 13- and 17-year cicadas is Magicicada, shortened from “magic cicada.”

Will Brood X come to New York and the Capital Region?

Brood X will not appear in New York State in 2021. Previous broods have appeared in New York in 2013 and 2018, but not in the Capital Region.  You can view the Active Periodicals cicada brood map to learn more.

Cicadas are insects that send off a buzzing sound often heard on summer nights. Most cicadas appear from late June through the end of August. Others emerge in broods every few years or so. Here are a few fun facts:

Why does it take 17 years for cicadas to come out?

According to cicadamania.com, Cicadas begin life as a rice-shaped egg, which the female deposits in a groove she makes in a tree limb, using her ovipositor. The groove provides shelter and exposes the tree fluids, which the young cicadas feed on. These grooves can kill small branches. When the branches die and the leaves turn brown, it is called flagging. 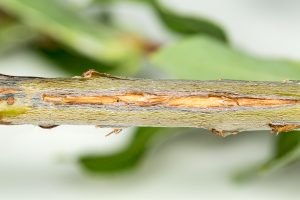 Cicada damage on tree twig from cicadas in Virginia. Detailed macro image of holes drilled into bark for laying eggs. Twig dies back, falls to ground and grubs burrow into earth

Once the cicada hatches from the egg it will begin to feed on the tree fluids. At this point, it looks like a termite or small white ant. Once the young cicada is ready, it crawls from the groove and falls to the ground where it will dig until it finds roots to feed on. It will typically start with smaller grass roots and work its way up to the roots of its host tree. The cicada will stay underground from 2 to 17 years depending on the species. Cicadas are active underground, tunneling, and feeding, and not sleeping or hibernating as commonly thought.

They have been building their strength eating roots and other tasty treats awaiting their call to freedom. Those that survive being eaten by nature’s hungry wildlife, mate and fall to the ground where they will burrow into the earth for another 17 years.

Are cicadas the same thing as locusts? 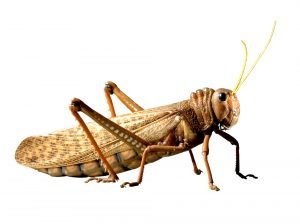 Technically the answer is no. People refer to periodic cicada broods as locusts. Unlike cicadas, locusts are damaging to crops and landscaping.

To learn more about periodical cicadas, read https://www.cicadamania.com/where.html. The site provides charts and information about these broods across the U.S.

Are cicadas dangerous to humans?

No, besides the fact that the sound is louder than a chainsaw or jet plane, cicadas pose no threat to humans.  Cicadas do not sting or bite.

What do I do if I think I have cicadas?

If you are unsure if you have cicadas or damage from cicadas, give us a call at 518-374-0357. We will come out and inspect your home or business and discuss treatment options with you.

← How did I get bedbugs in my home? What are the pests you should look for when buying an older home? →