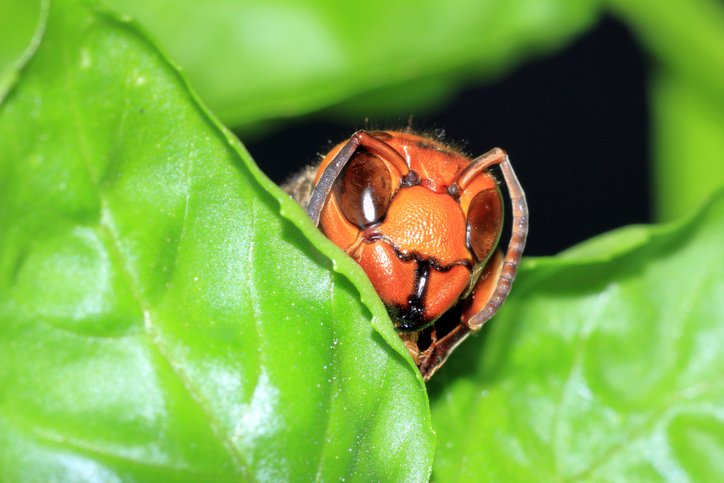 Asian giant hornets or murder hornets are very large and can reach up to 2 inches in length. A thorough description as provided by livescience.com in May 2020:

The Asian giant hornet species (Vespa mandarinia) is a large social wasp about 2 inches long that has recently been spotted in Washington. The hornets sport orange heads, orange stripes and a pointed rear end with a big curved stinger. Native to eastern and Southeast Asia, they prey on honey bees — ripping them to pieces — and kill a few dozen people a year with their painful stings.

V. mandarinia, the “murder hornet” species, sports yellowish and orangeish stripes on its rear end in images the researchers collected, as well as a black thorax and a distinctive orange face. Found in India, Sri Lanka, Bhutan, Nepal, Myanmar, Thailand, Laos, Vietnam, Malaysia, Malaya, China, Hong Kong, Taiwan, eastern Russia, Korea, Japan — and now the Pacific Northwest — it also has a characteristic tendency to nest underground in mammal burrows and the cavities left behind by decaying plant roots, the researchers reported, “enlarging them as the colony develops.”

Why are these bees called Murder Hornets?

The wrath of these bees is not specifically targeted to humans, but to honey bees. According to a New York Times article by Mike Baker on May 27, 2020:

Beekeepers have been particularly worried that the Asian giant hornet, which can grow up to two inches long, could decimate beehives if it becomes established in North America. The hornet, which earned the nickname “murder hornet” among some in Japan, has an appetite for bee carcasses, conducting attacks on hives that can swiftly wipe out an entire colony by decapitating the bees one by one.

With a potent stinger, the hornet can be a public health threat if someone is stung repeatedly, and it is linked to up to 50 deaths a year in Japan.

The so-called murder hornets, which have surfaced for the first time in the United States, have a particular appetite for bees and specialize in group attacks. The slaughter begins when a worker hornet spots a colony, marks it with a pheromone and then brings a backup crew of between two and 50 others. While a honeybee hive can have thousands of residents, hornets can wipe out the whole population in hours.

During one recorded slaughter examined by researchers, each hornet killed one bee every 14 seconds, using powerful mandibles to decapitate its prey.

Spring is in full bloom and accompanied by pests, wildlife, and bees! At Accurate Pest Control we protect families and businesses from bees and wasps:

When our customers call about bees, we respond promptly to get to their home or business to treat or remove the bees as quickly as possible. We strongly advise that homeowners do not attempt to remove a nest or hive. We have trained technicians with the proper gear and experience to perform those tasks. We have also joined forces with local beekeepers who will remove the hive, relocate, and save it. If there is damage to your home or property from these hives or nests, we will do the removal of the structure to access the hive and the repair of the structure once the hive is removed.

Please note: If you are stung by a bee  or multiple bees and you are unsure of your reaction or an allergic response, please seek immediate medical attention.

Have a great summer!

The warmer weather brings insects to backyard BBQ, family dinner on your back deck, or…

Cockroaches: exterminate them or adopt one?

Cockroaches! Just the mention of the word cockroach makes people shiver or sweat. It conjures…

Given the gravity of the situation with the Coronavirus outbreak, we felt it was prudent to reach out and assure you your health and safety are our priority.

We are classified as an essential business and will continue to be here for our community and your needs. We are in full compliance with all measures set forth by federal and state lawmakers. This turbulent period in our country’s history is unprecedented yet safety and cleanliness have always been in the forefront of our business.