Yes, you read that right, “Bugs in the News!” It is a new year, and at Accurate Pest Control, we live and work every day with bugs. It’s not always glamorous, but it is what we love to do. We are a second-generation owned business and have had customers for decades. We wanted to share with you news articles that we found interesting as ‘pest people’ and thought you might too.  Happy reading!

At Last, a True Millipede That Actually Has 1,000 Legs or More

Who knew that an actual millipede existed? Well, The New York Times found one!

“A species found deep underground in Western Australia shows that “millipede” is not always a misnomer.

It’s a well-known fact among entomologists that whoever first named the millipede was being a touch dramatic. The name means “thousand-footed,” but no millipede has a thousand feet.

At least, that was true until now.

A discovery deep below the surface of Australia has shown that “millipede” isn’t always a misnomer. Researchers found a new species that can have more than 1,300 legs. The finding was published Thursday in Scientific Reports.

How (and Why) to Kill a Lanternfly 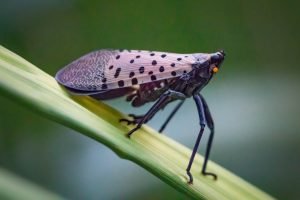 A Spotted Lanternfly looks like it’s ready to pounce!

In September 2020, we did a blog post entitled, What is a lanternfly?  The spotted lanternfly is a threat to agriculture and agribusiness in New York.  Often mistaken as a stink bug when their wings are closed, they are found in New York State’s orchards, logging, and other farm crops. So on October 4, 2021, The New York Times reporter Ashley Wong cried out to all New Yorkers in a call to action:

“If you come across this striking, spotted bug, don’t hesitate. Kill it — it’s a lanternfly. The invasive species has united New Yorkers in a crusade to wipe the insects from the city. New York’s Department of Agriculture and the city’s Parks Department have called on anyone who sees a lanternfly to kill it by the most direct means possible: Stomp on it. You could also scrape the bug or its eggs into a jar of rubbing alcohol or hand sanitizer.

As far as invasive species go, lanternflies rank relatively low on the threat meter, but they can weaken the plants they feed on, so scientists are trying to figure out how to control the population.  Until then, we are all lanternfly killers.”

On December 17, 2021, AP News posted an article about the Western Glacier Stonefly.  Pests in the news! Check this one out:

HELENA, Mont. (AP) — Federal wildlife officials say two species of rare insects in the Rocky Mountains will need several thousand acres of glaciers and snowfields if they are to survive a warming world that’s threatening them with extinction.

The western glacier stonefly and the meltwater lednian stonefly live in streams that flow from melting glaciers and snowfields. Scientists say the insects are not doing well and face continued declines as they lose a projected 80% of their habitat in Glacier National Park by 2030.  Read more… 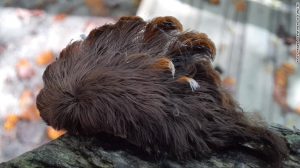 CNN.com published an article on the scary bugs of 2020 and what we should have seen in 2021. We had murder hornets, Brood X Cicadas, and poisonous caterpillars, but his one caught our eye, Venomous tribble-like caterpillars:

Behold, the fluffiest and most evil caterpillar to ever slink the earth. In October, multiple sightings of the puss caterpillar were reported in Virginia, prompting the state’s Department of Forestry to warn against petting, or even approaching the creatures.  Their brown fur is oozing with venom, and just brushing up against one can cause an itchy rash, vomiting, swollen glands, fever and, according to one resident who was stung, “pain like a scorching-hot knife.” The caterpillars are native to areas in the far South and Midwest, so experts were pretty puzzled when they reared their furry heads in Virginia.

We hope you enjoyed reading about these interesting pests and bugs around the country and close to home. Pest control does not need to be overwhelming or expensive; it just needs to be present. So please don’t hesitate to contact us if you think you might have a problem with bedbugs, mice, termites, cockroaches, flying insects, or any pests or nuisance wildlife. We will send a technician to your home or business to take a look and speak with you about treatments and options.

Happy New Year from all of us at Accurate Pest Control.