Are wasps dangerous to humans?

If you enjoyed this past Fourth of July weekend with a picnic or swim by the lake, you may have experienced a buzz by or two. Was it a bee or a wasp and where do they fall on the danger barometer? Wasps are very dangerous and territorial. When challenged they will not only sting you but will sound the alarm to the others and a swarm will not be far away.

What is the difference between a bee and a wasp?

Most people think they are the same and present an equal amount of trouble. When they are buzzing by your picnic table, they may look the same, bees and wasps are different. Wasps are far more dangerous than bees.

Encyclopedia Britannia explains, “Unlike bees, which can sting only once—the process is ultimately fatal to them—wasps can sting multiple times and buzz merrily away (assuming that they aren’t crushed by their outraged victims).”

While the sting of both can be unpleasant, a wasp presents a greater danger to humans, especially people allergic to bees or wasps. 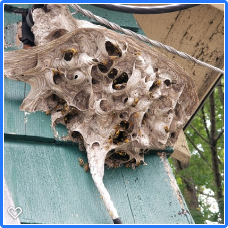 Identifying wasps can be dangerous and difficult. They are close relatives to the bees, yet very distinctive. Wasps, hornets, and paper wasps are very active during these hot summer months. 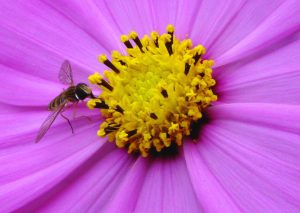 We just thought this was a great fun fact to share and special thanks to the people at National Geographic for this information:

Scientists have discovered that Polistes fuscatus paper wasps can recognize and remember each other’s faces with sharp accuracy, a new study suggests.

In general, an individual in a species recognizes its kin by many different means. But faces are extremely important to species such as humans, said study co-author Michael Sheehan, a Ph.D. candidate at the University of Michigan in Ann Arbor.

“Studies show that when you look at a face, your brain treats it in a totally different way than it does other images,” he said.

“It’s just the way the brain processes the image of a face, and it turns out that these paper wasps do the same thing.”

The unique, distinct faces of P. fuscatus wasps, as well as the wasps’ ability to recognize and remember each other’s faces, are likely tied to the insects’ multicolony social structure, Sheehan added.

“They have multiple queens and they all want to reproduce—they all want to be the most dominant. So being able to recognize each other helps them understand who’s already beaten who, who has higher ranking in the hierarchy, and this helps to keep the peace.

“When they aren’t able to recognize each other, [as] we’ve shown before, there was more aggression.” 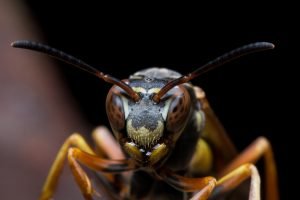 Contact a professional for assistance with wasps and bees.

Each year, we receive a significant number of calls from home owners who have attempted to remove a nest or have used a retail wasp (killer) spray and were repeatedly attacked and stung by wasps. Please, please do not attempt this on your own. These insects are very aggressive and territorial. Wasps are dangerous to humans and a professional pest control service should be contacted to remove wasps from your home.

Preventative treatment is suggested, and our services include spraying common wasp locations such as eaves, soffits, decking and other areas where a nest is often securely built buy the wasps.

Contact us for information on wasps, hornets and paper wasp prevention and treatment. Planning a small family and friends gathering around your pool or deck? Our special services provide one-time treatment for the area around your party area for wasps. mosquitoes, ticks, and other pests. Contact us to learn more.

Please note: Pest control is a socially critical service responsible for the protection of public health, food, and property. Pests spread diseases in our communities. It is critical that pest control and nuisance wildlife services continue to be performed, especially in this uncertain time we are living in.

We are committed to both public safety and the health and safety of our residential and commercial clients. We continue to perform pest and nuisance wildlife removal and treatment services for hospitals, nursing homes, retail, businesses and of course, residential services.

← Safe and Happy Fourth of July! The value of pest control maintenance agreements →